If you'd like to listen to this announcement instead of reading, you can find an audio/video version of it here.

This May, OpenCommunity turned 5 years old! Yay, what an achievement! And sure, over a year of that has mostly been hibernation, BUT a 5th anniversary is still a good time to get together, have some fun and reminisce! That's why I'd like to invite everyone to the OpenCommunity 5th Birthday / Retirement Party! 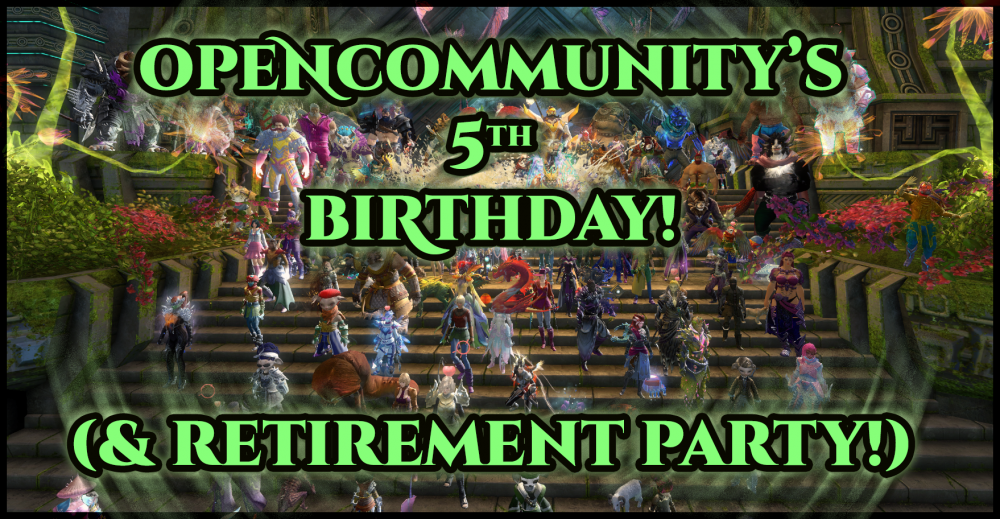 The party will be a celebration of all the fun times we've had throughout the past 5 years, and we will be inviting commanders from throughout OpenCommunity's history! We're not going to complicate the schedule too much, we just want to get together and have a fun time (but there is a likelihood of doing some Triple Trouble with extra silly rules).

So What's All This About Retirement?

When we decided to reset everything and just build something new from scratch, we always did it with the caveat that we'll only do what people want to do, so unless there's a strong interest for OC to do XYZ, we didn't want to push the issue. But as you may have noticed, there wasn't really a lot of interest for any major activities. Basically, most of our most prominent members are just not playing GW2 actively anymore, and those that are still active, were able to find other guilds or communities which are playing more actively.

So, what do we do with OC? Well, one option was just to pack it up and close it down, but honestly, that'd be kind of a lame epilogue to the great adventure that OC was, and if we can still do it, I'd love to still continue doing Tyria Pride, so, on the last Community Assembly, and a little chat we had a while later with some members, we decided it was best for OC to go into "retirement".

Basically, what this means is that we're just officially transitioning into a more chill state. For a while now, it's been like "OC is currently going through some changes!", and this is just a way to make it official that the changes are going to be done!

So What Are Those Changes? What's OC going to be?

The way I've imagined it is that OC will be kind of like that place with the bunch of people from the olden days. I'll be shaping up our discord a bit, adding a few chat channels (and possibly a voice channel or two? Let me know if you think that's a good idea!) Basically, here's what a retired OC looks like in my mind:

And, don't forget, we also have the new Teamspeak, GW2League! GW2L is what people thought OC was in the first place - it's a teamspeak where guilds get their own channels, in which they have full admin privileges, can designate mods, access a wide array of permissions, etc.

Alright, I think that's it for the announcement!

Oh, and tell your friends!

You will be able to leave a comment after signing in